The Gospel according to Mark was written to record Peter’s teachings about Jesus, so it should come as no surprise that the Lord’s call to the disciples to “come, and I’ll make you to become fishers of men,” had a profound impact on Peter. A fisherman by trade, and one who found balance on the water, Peter understood life best when he was casting a net, which is likely one reason he returned to fishing in John 21.

When Jesus called the disciples to follow Him, and become fishers of men, He was not only calling them to be His apostles. He was telling them what they would be doing. 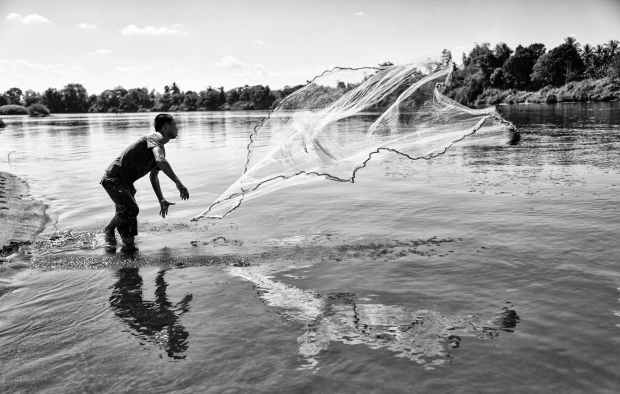 Photo by DoDo PHANTHAMALY on Pexels.com

Likewise, we are called to be fishers of men. Our call mirrors that of the disciples. Jesus has called us to follow Him, to cast a wide net, and to work together.

We are called to follow Jesus. The disciples were called to follow. When Jesus said, “Come ye after me,” in Mark 1:17, He was telling them, “Fall in behind me and follow Me where I go.” Jesus led. They followed.

For us, it’s Jesus who saves, changes/transforms lives, who hears our prayers and intercedes for us before the Father. We don’t accomplish these things through our own wisdom or innovation. It’s Christ, working in us through the Holy Spirit with the blessing of the Father. We merely follow and obey, ministering, praying and serving as the Lord leads.

Jesus called, and in Mark 1:18-20, the disciples left their nets, boats, fathers and employees, and followed Christ. They left it all behind. To follow Christ, we, too, must leave it all behind. While some are called to leave the life they’ve built in order to become missionaries overseas, not every one receives that order from the Lord.

Following Jesus meant starting over for the disciples. For us, it means starting over by allowing Christ to transform us from the inside out.

The question then becomes, “Are you following Christ? Or are you wanting Him to fill the gaps in your life?”

May God bless you in your Spiritual journey.

The Futility of Fishing Alone

When Jesus told His disciples, “Come after me, and I will make you fishers of men,” we often misinterpret what He said. Having grown up in the United States, where the most common form of fishing is recreational, and is accomplished with a rod and reel, we often think of fishing as a recreational activity meant to be enjoyed in a relaxing manner. Such an activity can easily be enjoyed alone, and in some cases, it’s easier to enjoy the serenity of God’s creation when fishing alone.

However, as previously mentioned, fishing for the disciples of Christ was not a recreational activity accomplished with a rod and reel. It was a commercial enterprise undertaken for mere survival that was accomplished by casting a net. One thing we did not specifically address in the above-linked post is how the net was cast, and how it was drawn from the water.

In order to successfully fish with the types of nets the disciples used, you had to have a team (which is one reason you didn’t see the disciples by themselves when Jesus called them to be fishers of men. They were working as teams.) Often, these disciples utilized two boats to draw the net from the water. It took a lot of hands to fish with those nets, but the harvests could be great. With the help of Christ, they were on more than one occasion.

A fisherman who chose to fish alone would not only have a hard time properly casting the net, but properly drawing the net with a sufficient catch would prove nearly impossible.

The Spiritual application to this fact is that, as Christians, we will never be as strong in isolation as we will be when gathered with our brothers and sisters in Christ. The fundamental truth of fishing, whether commercially in Jesus’ day, or Spiritually in our day, is that it is a team effort. The Christian who chooses to isolate himself from his brothers and sisters in Christ has chosen a life that will prove frustrating and discouraging.

Therefore, let’s heed the Biblical command in Hebrews 10:25, which tells us not to forsake the assembling of ourselves together, and let us come together to encourage, pray and lift up each other. Then, let’s minister for the Lord together.

Photo by Nick Santarone on Pexels.com

If I were to invite you to go fishing with me, what would you expect?

You would probably expect a relaxing afternoon on the local lake in a small boat, holding a fishing pole, and making casual conversation while waiting for the fish to bite. And why wouldn’t you? Living in America, all we’ve seen of fishing is canes, poles, lines, tackle and bait. Fishing in America is recreation. (Unless, of course, you work on a shrimp boat on the Gulf Coast.)

So, when we read that Jesus told His disciples that He would make them “fishers of men,” we tend to envision fishing poles, spoon lures and minnows.

In the Bible, Peter was a fisherman. Popular tradition holds that he was an expert fisherman, and had honed his craft well, building a great fishing business that he walked away from upon becoming a disciple of Jesus. However, if you were to travel back in time, and hand Peter a rod and reel, he would look at you like you were crazy. Peter had never seen such.

Fishing for Peter, and the other disciples so employed before following Jesus, involved the casting of nets in order to draw in as many fish as possible. This was not recreation to them, this was survival. It was how they gathered food, not only for their families, but also to sell for necessary provisions. Fishing was work. Fishing was business. Fishing was absolutely necessary for survival.

The casting of nets not only enabled Peter and his colleagues the ability to draw out as many fish as possible, but it also required a team effort. You never see the disciples fishing alone. In fact, in many cases, it took two boats to cast and draw a net. There are fish in that sea. We need the food. Therefore, we are going to draw out as many as we can.

With the modern American approach to fishing involving a rod and reel, many get the wrong idea when Jesus said, “Come, and I will make you fishers of men.” Some church leaders have taught that this means that the church should use bait to lure unsuspecting sinners in the door, then hit them with the surprise Gospel. Others have advocated that this means “finding the right fishing hole.” As a result, Christianity’s evangelistic efforts have suffered. As a whole, Christianity is not reaching as many as it has in the past, and new converts are not being properly discipled.

However, if we apply the imagery of casting a net, and drawing it back out of the water, we get a more beautiful picture of what Christ was referring to when He called His disciples to be “fishers of men.” Instead of targeting outreach to certain “fishing holes,” or trying to find the right “bait,” we should instead cast a wide “net,” reaching as many people as possible, regardless of location, demographic, or socioeconomic status.

In essence, our evangelistic efforts should be an all-out effort to reach every individual in our communities. This is accomplished when the membership of the church takes on the responsibility of personal evangelism, and when the church openly promotes, propagates and teaches the Gospel. When the church commits itself to its message, the Gospel, and relentlessly communicates that message, people will be reached and lives will be changed.

The mission of Life Point Baptist Church is to cast as wide of a net as possible, reaching as many as possible with the Gospel. This we will do, if we follow the example of the disciples, and follow Jesus as we continue to learn from Him.