The annual Community Easter Sunrise Service will be held at 7 am Easter Sunday, April 17, at the Early Visitors and Events Center at 419 Garmon Drive in Early. The event will feature congregational hymns, special musical presentations, scripture reading and a special message from Leland Acker, pastor of Life Point Baptist Church of Early, TX.

The Community Easter Sunrise Service has been a staple in Brown County since it was first held in 2012. It provides an opportunity for local residents to experience the hope of a new day, celebrating the resurrection of Jesus Christ, as the sun rises over the outdoor pavilion.

Everyone is invited to attend. For more information, call Leland Acker at (325) 200-8531, check out the event on Facebook at https://fb.me/e/2WMmJ2fZf, or contact Life Point online at www.PointToLife.net.

Photo by Pixabay on Pexels.com

This is the one thing that all people seek. Redemption.

It is romanticized in literature, sought through accomplishments, and desired for lifetimes. Redemption.

Redemption is often called by different names: liberation, validation, triumph. At the heart of these desires, however, is redemption.

Last weekend, millions across America celebrated Tiger Woods’ victory at the Masters. Woods’ first Masters victory in 11 years, coupled with his recovery from injury, personal failures, and controversy, prompted many in the media to hail his “redemption.”

Redemption was a theme interwoven into the NFL careers of Carson Palmer and Bruce Arians, whose careers had been sidelined due to firings and trades, then re-ignited when they were signed by the Arizona Cardinals, before making it to the NFC Finals.

We frame it in so many ways, but at the end of the day, all we are really after is redemption. And true redemption cannot be found in one last championship, one last victory, or in a dream come true. No matter what victories we score in life, we will never receive the fulfillment we seek, unless our redemption is a Spiritual one.

And that’s what Christ purchased on the cross for us.

Then, in one of the most important things ever written, Paul defined the Gospel. In 1 Corinthians 15:3-4, Paul wrote:

How did Christ purchase our redemption? He died for our sins, He was buried, and He rose again the third day in fulfillment of the Old Testament scriptures.

The death of Jesus Christ on the cross paid the price for our sin. 1 John 2:2 says that He is the propitiation for our sins. A propitiation is a payment made to God to atone for sin. A propitiation cancels a debt owed as a result of sin. To make this payment on our behalf, Christ gave Himself, and was nailed to the cross, and gave up His life.

Historically, churches have commemorated the death of Jesus Christ on the cross on “Good Friday.” (In all actuality, He was likely crucified on a Wednesday, but that’s a story for another day.) On Easter Sunday, we celebrate His resurrection.

In 1 Corinthians 14:3-4, Paul wrote that the Gospel is how Christ died for our sins, according to the scriptures, that he was buried, and that He rose again the third day according to the scriptures. He then spends the rest of the chapter defending, and advocating, that Christ rose again from the dead. When you see how adamantly Paul argued that the resurrection happened, you will understand not only how important this doctrine is to Christianity, but also how much hope it gives us.

As Phil Robertson once said, “A dead savior can’t do much for you.” However, a living Savior advocates for you and opens the doors of Heaven for you.

The resurrection of Jesus Christ shows us His victory over death, which will also be our victory if we know Him as Savior. And that’s true redemption. To be rescued from the pain of this life into an eternal life with no pain, to be transformed from the old you into a gloriously new version of you, and to be cleansed from all unrighteousness is the ultimate redemption, and that is truly what we celebrate, not just every Easter, but every Sunday as well.

The Early Visitors and Event Center will be the site of the 8th Annual Community Sunrise Service on Easter Sunday, Pastor Leland Acker announced Monday via Facebook. Life Point Baptist Church first sponsored the Community Sunrise Service in 2011. The service, which features Gospel singing, and preaching, will begin at 7 a.m. Sunday, April 21, at the newly built Early Visitors and Event Center. The entire Early and Brownwood communities are invited.

The Early Visitors and Event Center is located on Garmon Drive (Hwy 84/183 East), at the corner of Live Oak Rd., in Early. The Sunrise Service will be held in the courtyard in the back of the facility (pictured above). The sun will rise to the left of the pavilion, allowing those in attendance to experience the sunrise on the Lord’s day. The event center building will also be open that day, allowing access to restroom facility, and shelter from inclement weather.

Come join us for a moving worship experience, celebrating the resurrection of Jesus Christ on Easter Sunday. Enjoy good Gospel singing, and a Gospel message from Pastor Acker.

For a map to the Early Visitors and Event Center, click here. 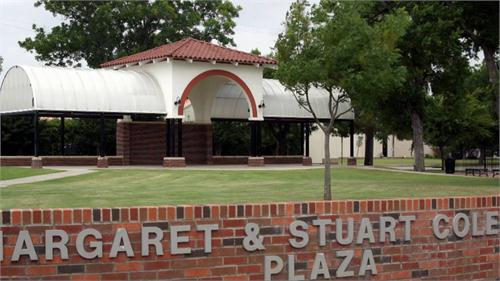 The 6th Annual Community Easter Sunrise Service will be held at 7 a.m. Sunday, April 1, at the Margaret and Stuart Coleman Plaza at the Depot Center, which is located next to the Adams Street Community Center in Downtown Brownwood.

“The Community Easter Sunrise Service began when our church saw the need for a central place for Christians to come together and celebrate the resurrection of Jesus Christ on Easter Sunday,” said Pastor Leland Acker. “There is just something special about being outdoors as the sun rises on the day that we celebrate the Lord’s resurrection. It gives you the feeling of a new day, a new hope, and blesses you with a unique experience that can’t really be described.”

Acker said the resurrection is the foundational doctrine of Christianity.

“Christianity is built on the idea of redemption, new life, and eternal life,” Acker said. “The Bible teaches that we have all gone astray, we have all lost our way, and we have all sinned against God. Sin leads to destruction and eternal condemnation, but Jesus Christ loved us so much that He gave His life on the cross, taking the divine consequences of our sin upon Himself.

“The Bible teaches that He was buried, but that He rose again the third day, where He conquered death, thus opening the gates of Heaven so that all that repent and believe in Him will be given eternal life.”

Acker went on to say that because Christ rose from the grave, He lives, is seated at the right hand of the throne of God, and advocates for His believers daily.

Acker will bring a special message at the Community Easter Sunrise Service at 7 a.m. Sunday, April 1. Bro. Waymon Childress will lead the group in Gospel singing as the sun rises.

Life Point Baptist Church was founded in 2008 in Brownwood, Texas. The church currently meets for Sunday School at 10 am every Sunday, and morning worship at 11 am every Sunday, at the Early Small Business Incubator Facility (also known as the Early Chamber of Commerce) at 104 E. Industrial Dr. in Early. Life Point’s worship center is being built on Sunrise Drive in Early, with completion expected this summer.

The Community Sunrise Service is just that… a community-wide Easter Sunrise Service. If your church is not holding a sunrise service, and you still want to be blessed by this beautiful tradition, then please come worship with us.

The Community Sunrise Service will be at 7 a.m. Sunday, April 16, at the Depot Pavilion (where the above video was filmed) in downtown Brownwood. Come, and be blessed.

That is the point of 1 Corinthians 15, as written by the Apostle Paul under the inspiration of the Holy Spirit. Paul wrote:

But if there be no resurrection of the dead, then is Christ not risen: And if Christ be not risen, then is our preaching vain, and your faith is also vain. Yea, and we are found false witnesses of God; because we have testified of God that he raised up Christ: whom he raised not up, if so be that the dead rise not. For if the dead rise not, then is not Christ raised: And if Christ be not raised, your faith is vain; ye are yet in your sins. Then they also which are fallen asleep in Christ are perished. If in this life only we have hope in Christ, we are of all men most miserable. But now is Christ risen from the dead, and become the firstfruits of them that slept. (1 Corinthians 15:13-20)

The Apostle Paul was addressing a skeptical doctrine that was infiltrating the Corinthian church that there is no resurrection of the dead. In essence, the doctrine taught that, once you are dead, then you return to dust, never to rise again.

Paul’s objection to this heresy addressed the following key points:

The importance of the resurrection to the Christian faith is so paramount, that the Apostle Paul tied belief in the resurrection of Jesus Christ to the salvation of the believers (Romans 10:9-10).

This Sunday, we commemorate and celebrate the single most important event in Christian, and world, history. We celebrate the resurrection of Jesus Christ.

The Community Sunrise Service will be held at 7 am Sunday morning at the Depot Pavilion in downtown Brownwood. Come worship with us, and be a part of a truly moving experience.

Such was the stumblingblock for Lee Strobel, an investigative reporter for the Chicago Tribune. A self-described atheist, Strobel rejected Christian beliefs as superstition, fairy tales, and logic defying crutches that served as emotional supports for unstable people.

Stobel’s assessment of Christianity was challenged, however, when his wife, Leslie, professed her faith in Christ during a service at the Willow Creek Community Church in Chicago. Troubled by his wife’s new adherence to what he thought was a superstition, Strobel set out to disprove the most important doctrine of Christianity, the resurrection of Jesus Christ. Strobel chronicled this journey in his book, The Case for Christ, now a motion picture that has been released on 1,200 screens nationwide.

Instead of disproving Christianity, Strobel stumbled upon a mountain of evidence that supported the fact that the resurrection of Jesus Christ really existed. Such evidence included thousands of manuscripts of the New Testament, eye-witness accounts of the resurrection of Christ, historical documentation, and medical evidence of the cruelty of the beatings Christ endured, and the cruelty of crucifixion.

When standard journalistic investigation, historical research, and logical processes were employed, the resurrection stood on its merit. It really happened. Confronted with this truth, Strobel was forced to face the fact that, in this instance, he was wrong. He repented and accepted Jesus Christ as His personal savior.

The resurrection indeed happened. It is proven by the empty tomb, the multiple eye-witnesses to seeing a resurrected Christ (including the Gospels of Matthew, Mark, Luke and John, the testimony of the disciples, the fact that the Apostle Paul was confronted on the road to Damascus by the resurrected Christ, the testimony of the 500 mentioned in 1 Corinthians 15, and the fact that resurrection is the only logical explanation for sightings of Christ post-crucifixion.)

Sunday morning, we will celebrate the resurrection of Christ during our Easter Sunrise Service, which will be held at 7 am Sunday at the Depot Pavilion in downtown Brownwood. Come worship with us.